If Not For Mom, I Wouldn't Have Become A Writer 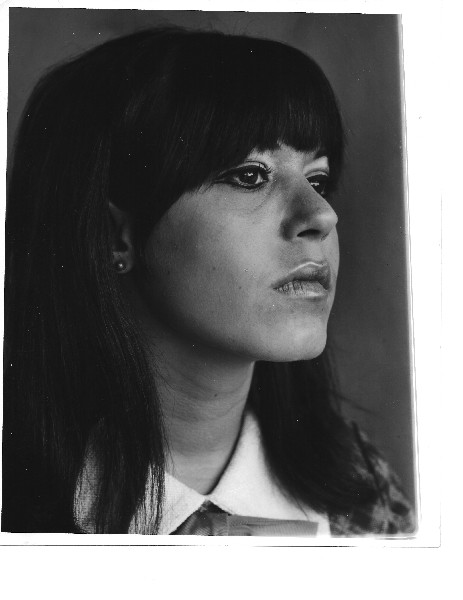 On November 21, my mom passed away, just shy of three months of when my dad did. My mom’s influence and my desire to create are inextricable. Below is how I eulogized her.

When I was in first grade, I spent a few days at Children’s Hospital of Miami. I had an IV in my hand, and for a couple hours one of the days, there was pain at the insertion site that radiated over the rest of my hand. I was very uncomfortable, and I remember Mom being extremely silly, doing whatever she could to distract me and cheer me up. She was running around the room, playing different characters. What really got me laughing was her Ed Grimley. You remember the Martin Short character on Saturday Night Live? “It’s a gusty day, I must say!” “Gimme a break!” “This makes me completely mental!”

As my older brother, Ari, noted, Mom was the first documented helicopter parent. She didn’t necessarily confront my teachers over grades; it was more her overbearance about the arts. If there were a movie or a song that spoke to her, she would beat it into us, and I’m glad she did because she had very good taste.

One day, Ari and I were getting ready to swim in the pool of our childhood home in South Miami, but Mom intercepted us and said, "You must watch the movie My Bodyguard right now."  We groaned, sat down to watch it and didn't move. It was the quintessential story of standing up to a bully, and Matt Dillon played the archetypal bully masterfully. Another time, she parked us in front of the TV and popped in Breaking Away into the VCR, an allegory of the underdogs and downtrodden rising up and winning a competition they had no business winning.

These are two of my favorite movies today, and there was eerie foreshadowing that both films were set in the Midwest, a land as foreign to a kid growing up in the southern tip of Florida at the time as China. In fact, the first place I lived in Chicago was on the same street as Lakeview High School, where My Bodyguard was filmed. Taking it a step further, I taught there for a semester.

Mom was also a Miami sports fanatic and indoctrinated Ari and me with vigor. We saw Dan Marino's first home game at The Orange Bowl, and we became and still are avid Miami Hurricanes fans.

But from there, the story takes a wrong turn. My parents divorced, Mom got sick, and we were separated for a long time. We eventually reunited, but gradually Ari and I took on the role of caretakers, so it wasn’t a traditional childhood, adolescence, or adulthood. It wasn’t a traditional anything. Absence and pain were experienced by all parties. My mom spent over half of her life suffering and steadily declining.

Since she passed, I’ve struggled to find purpose and meaning from her suffering. It could not have been all for nothing.

I realized it wasn’t.

In spite of everything--the time lost with my mom, my feelings of helplessness, my anger, my guilt and regret for not doing more--no one felt more proud of me than Mom. We were her pride and her only sources of joy. I mean, it was annoying because we were the best at everything in her eyes. Look, I'm a decent person, sure, but the only characteristic that The Dali Lama and I have in common is that we're bald. But Mom would have insisted that I was more philanthropic.

Mom was a talented writer and artist, and my final words to her were: “If not for you, I wouldn’t have become a writer.”

When we cleaned out her apartment, Ari found a box containing hardcopies of poems, stories, and sketches I wrote dating back to college. I didn’t have copies saved anywhere, but of course Mom did. As I sorted through them, I remembered the classes, professors, some fellow students, and where I was when I composed them. 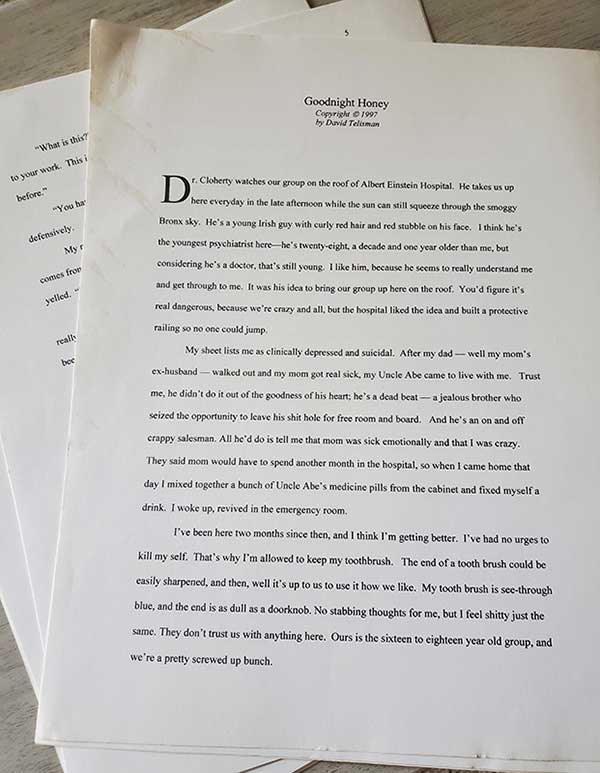 At Ari’s urging, I’m going to read a passage from a story called “Goodnight Honey” that I wrote my senior year of college in 1997. It’s tightly based on my experience with Mom when I was in high school, living with her in New York. Of all times, the story is set during Thanksgiving, and life is imitating art as we lay Mom to rest the day after. This is from the conclusion when the narrator, who’d been staying with his uncle, is reunited with his mother, who’d been in the hospital:

My grandparents are coming up from Florida tomorrow to spend the holiday with us. Mom looks better, but she’s still worn out from the surgery. Her face isn’t the same. Her skin droops a bit, and it’s more wrinkled. When we walk, I need to slow down for her. Sometimes she needs to hold onto my arm. Our apartment seems different--seems like no one’s been here for months. The familiar smell is gone, too. That’s the first thing I’d notice whenever I’d walk through the front door. Guess I’ve been away a long time. My room’s the same, though. Same bed sheets, same books piled on my desk, even the same channel I last watched on the TV.

I’m lying in bed watching Late Night with Letterman. Mom’s in her room reading the manuscript she’s never finished, but I know she’ll come in soon. It’s called “Walking on Frosted Fields of Juniper and Lamplight.” She got the title from the Simon & Garfunkel song, and it’s about the memoirs of a widow.

I’m not blind to the fact that another growth can easily form. I try to be optimistic, but I’ve been let down too much, and I won’t be surprised if mom’s stay at home is short.

I’m actually very tired. I turn off the TV and begin to drift. I hear the soft footsteps of pink slippers, and my door opens. Mom sits on the bed, does her mattress habit with one hand, and strokes my hair with the other. She covers me all the way to my neck with my blanket and then kisses me.

“Goodnight, honey,” she says into my ear, and I just know that for a little while things will be alright.

That short story won my university’s fiction prize. I’ve written a lot in my career, but this is my proudest achievement. The award was something that I also didn’t save, but guess who did? And here it is: 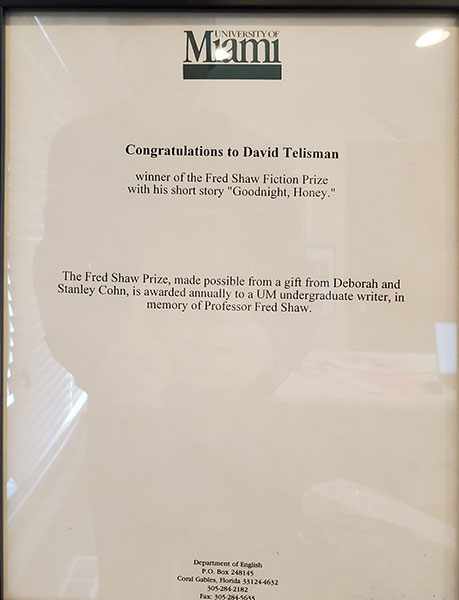 For the most part, I don’t believe in an afterlife, but I’ve never wanted heaven to exist as badly as I want it to for Mom because she deserves a do-over and some peace. Goodnight, Mom. I will always keep you in my heart.