"Ride It Out": Remembering My Dad 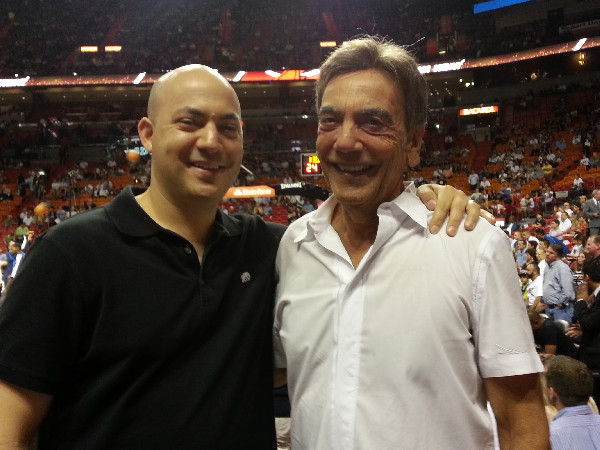 On August 23, my dad passed away, following an eight-year battle with Multiple System Atrophy (MSA), a rare disease with a rate of one in 100,000. People live up to seven years with MSA, and Dad managed to notch an extra one, a rare feat for a rare disease.

About a year ago, I was talking with someone at a shiva of all places about Dad. She asked if I knew what I’d say in my eulogy, and I told her I did.

She said, “Tell him now before he’s gone. We make the mistake of expressing what a parent means to us when they can’t hear us.”

I’m really glad that Dad got to hear what I’m about to share with you.

Dad, of all the memories I have of you, there are three moments that reside in my heart and mind that help me continue to develop as a person and a parent.

It was my sixth birthday party, and one of my presents was the iconic Stretch Armstrong, a rubber doll of a chiseled superhero type, who, well, stretched. The idea was to stretch his limbs and then watch them recede back to his core. Near the end of the party, we thought it would be a great idea for five of us to take each limb and his head and stretch him as far as he could be stretched. And so we did, stepping back and stepping back, and the doll stretched and stretched until it ripped apart, and all this red, viscous goop dripped out of him--laden with toxic chemicals, if I were to bet--that actually tasted pretty good.

Remember how devastated I was, Dad? I cried and cried; my birthday was ruined. Later that night, long after I’d fallen asleep, you woke me up. My eyes were bleary but came into full focus as you presented a brand new and non-mutilated Stretch Armstrong. I remember so clearly you standing over me, and I can still feel the touch of the doll on my chest.

This small, good thing taught me to do my best to come through for my kids and how magical surprises can be.

Not long after the #StretchArmstrongMurder, we were on an outing on my late grandfather’s boat in Miami. While everyone was taking in the sea breeze and sun, I was playing with my Star Wars actions figures. It occurred to me that I hadn’t been an asshole for like 10 minutes, so I brought Boba Fett over to you and said, “Dad, I’m gonna throw Boba Fett overboard.”

You weren’t paying attention, so I threw Boba Fett overboard. And then I freaked out and ran to you.

“What?!?” You yelled back, and sprung into action.

You had the boat turn around, you grabbed one of the long, hooked poles meant to snag rope lines--not jettisoned Boba Fetts--and somehow, somehow fished Boba out of Biscayne Bay.

The takeaway was that, in addition to understanding the impulsivity of young children, you instilled an instinct in me to mitigate the smallest of disasters. Even though what I did was stupid, you didn’t hesitate to solve the problem.

Moment Number 1: “Ride it Out”

I have Major Depressive Disorder and Generalized Anxiety Disorder. My darkest, most despairing days were in my mid-20’s. Many people have some form of mental illness or are close to people who do. Living with it can be disruptive at best and impossible at worst. I was experiencing the latter.

But a turning point happened in April of 2003.

I was completely broken and weeping. Dad, I called you, and you listened. When someone is suffering, our natural instinct is to try to throw out solutions, when simply listening can be so much more powerful. You continued to listen. When I stopped, you said, “Dave, ride it out.” It was the simplest of responses, but it was enough. “Dave, ride it out.”

Once I heard those words, I started to feel the hope I once had seep back into me. I stopped resisting treatment and gave myself the permission to nurture that hope, and I felt whole again. Now, Depression and Anxiety don’t go away like the Measles do, but I manage mine a lot better, and when they are triggered, I access that mantra: “Ride it out.”

Dad, you did the best you could as a parent. There are so many things I learned from you that I apply today that are helping me be a better father. You told me during my last visit with you, “Dave, I’m really happy with the way you turned out.”

Dad, you had a lot to do with that.

Donations in my dad’s memory can be made to MassGeneral Ataxia Unit and Laboratory for Neuroanatomy and Cerebellar Neurobiology in Boston (617-724-6432).